* Must be registered to bid prior to preview - so register NOW!!

* On-Line Auction ends March 31 at 7:00 pm. Pick up of items begins at 12:00 on April 1. Please see more pick up dates on-line. Packing & shipping by The Mail Center and Buyer pays them directly (we will deliver item to them as timely as this virus will allow, we hope within a couple days.

* Invoices will be emailed after Auction and there will be a link to pay immediately with credit card.

* If you have a current Cliff Shuler Auctioneers Gold Card and are in good standing with us we will accept cash or check payable no later than 2 pm on April 1, You will pay the 6% Internet Fee (or you can still pay by credit card which must be done from your invoice & by noon).

TITUSVILLE — There is nothing like the atmosphere of a live auction — the thrill of the bid and the thrill of the chase for treasures. Auctions are a form of entertainment. The cast of characters who make up an audience on a particular auction day represent what America is about.

Many see auctions as the last bastion of the competitive free enterprise system.

Pilgrims utilized auctioneers to establish commerce and auctions were used to sell crops, livestock, furs, tobacco, and other assets.

Today, it is estimated that more than a quarter– trillion dollars in goods and services are sold by live auction every year in the United States, according to the National Auctioneers Association.

“Auctions are an efficient way to turn assets into cash quickly, whether it’s household items, livestock, real estate, antiques, equipment and machinery, vehicles, and so forth,” said businessman Cliff Shuler, who founded Cliff Shuler Auctioneers & Liquidators Inc. 41 years ago, in 1977. “Auctions have wide appeal. They are fun and entertaining.” 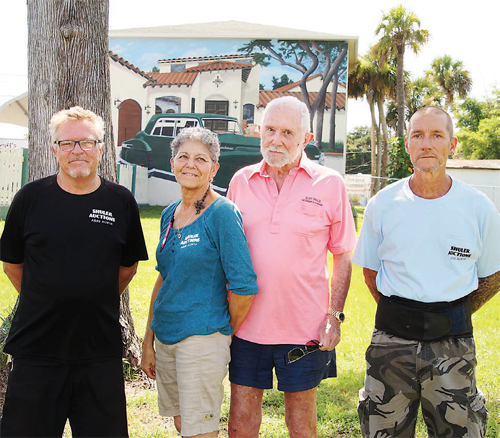 After reading the story of Sierra Journey Factor in the FLORIDA TODAY in April 2009, local Businessman and resident Cliff Shuler just couldn’t stop thinking of Sierra’s situation. First the young girl’s medical condition and second that she had to go to China for treatment. He decided he needed to help.

First was a $500.00 contribution to the Sierra Journey Factor Trust Fund in April. In May, Shuler made the decision of donating the net proceeds from the food and beverage sales at his May 17th public Auction - $1,152.00 was deposited into Sierra’s Trust Fund.

What can he do next? Then, this month, Cliff receives a telephone call from a customer that wants to give him a 1974 Corvette Stingray, just come and pick it up. Cliff does and will sell the Corvette at public Auction on July 19th and, again, will donate the net proceeds to Sierra Journey Factor. The Stingray is in need of rejuvenation - love and money will take care of that and bring it back to the quality of live it should have – Almost like Sierra’s plight. Wouldn’t it be something if the legacy of the Corvette would continue and all net proceeds from each sale would go back to Sierra?

ORLANDO, FLA.– Long-time service and dedication to the auction industry and the community has earned a Titusville business woman a prestigious honor. Debbie Shuler has received the 2004 Lewis C. Dell Auctioneer Hall of Fame award from the Florida Auctioneers Association (FAA). The awards presentation took place during the FAA’s Annual State Convention held Nov. 5-6 in Orlando.

“For the first time in my life I was speechless,” said Shuler, when reflecting on the awards ceremony. “This is such an honor.”

In reality, the honor has been for the FAA and her community. Shuler has been active in the auction industry since 1981when she began working for Cliff Shuler Auctioneers & Liquidators, Inc. (The business was founded by her husband in 1977.) She worked in almost every aspect of the industry from clerk to cashier, to ring person to laborer to bookkeeper.

In 1992, she became involved in the real estate auction industry and received her license as a salesperson, then a broker in 1994. In 1995, Shuler & Shuler Real Estate Auctioneers, Inc. was inaugurated. But it’s not just her success in real estate auctioneering that has brought recognition to Shuler. It is her philosophy about the business.

“We love this business and we work to support auctioneers throughout the state any way we can,” Shuler said.

This means lending a hand to start up auctioneers in the area. She has helped them by driving them to properties they can’t find, or by providing them with mailing lists.

Shuler is known throughout the state for her work with the FAA. She has served on its Board of Directors for several terms and has chaired or served on almost every committee, including by-laws and legislation, convention, public relations, newsletter and more. She was elected to the office of secretary/treasurer of the Board at the state convention. She has been active with the FAA for more than 18 years and during that time has attended nearly every state convention and seminar offered by the group.

“Being a member of the FAA helps auctioneers to forge bonds with other auctioneers and provides them with tremendous resources for growth and improvement, both professionally and personally,” she said.

Shuler also operates The Job Place, Inc., an agency offering temporary and temporary to permanent employment in the area. She has been involved in this business since 1981.

The Titusville Chamber of Commerce and by the American Business Woman’s Association have both bestowed the “woman of the year” award on her. And now she’ll be adding the Lewis C. Dell award to her resume.

The Lewis C. Dell Auctioneer Hall of Fame Award was named in honor of the late Lewis C. Dell, a well-known auctioneer from Sanford who was instrumental in getting auction license laws passed in the state. A charter member of the FAA, Dell served as president in 1979 and was the first recipient of the Hall of Fame award in 1985.

The Florida Auctioneers Association is a professional organization dedicated to the progress and advancement of the auction industry throughout the state. Members subscribe to the highest standards of professional practice and ethics, and stay abreast of the latest auction techniques and laws governing the auction method of marketing through educational programs, conferences and literature. For more information, go to www.floridaauctioneers.org.